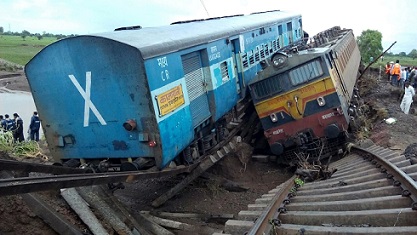 Derailment of rolling stock is defined as a wheel or set of wheels leaving the due place from the rail top surfaced.The derailment is serious occurrences and may also cause loss of human life besides the loss of Railway property. They also result in the heavy interruption to through traffic of trains leading to substantial loss of railway revenue. Therefore all efforts should be made to avoid derailments.

A derailment may be sudden or gradual due to a failure of one or more of the following :

There are two broad categories of derailment:

The possible causes for a sudden derailment are:

The factors contributing towards oscillations and resulting in off-loading and lifting of an individual wheel under running conditions are:

If the complete spring collapses, there is a serious danger of derailments the vehicle is considered to be unevenly loaded when the center of gravity of the load is not on the same vertical axis as that of a center of the vehicle.

The following are the major operational features which are significant in a derailment:

The speed of train plays a vital role in derailments. If speed is in excess of permissible speed, lateral forces on the flanges increase and the formation may not be able to resist this increased force thereby resulting in either flanges mounting or jumping off from the rail table.

Irregular or excessive loading may lead to derailment of a vehicle as the wheel may float due to off-loading.

Empty stock marshaled in between two loaded wagons forces the empty stock, especially the four-wheeler units, to jump off under the impact of drawbar forces and derail.

Following problems may also result in a derailment:

Improper Train Operation by the Driver:

The sudden application of brakes cause bunching and Offloading of light loaded wheels. This may also result in derailment.