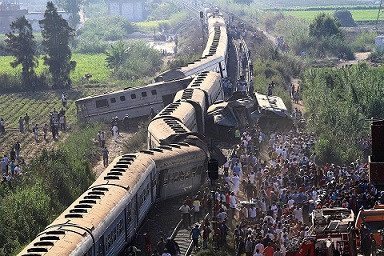 Collisions may be within station section or in the block section. It may be

In station section, any of the above three types of collisions may occur.

Head on collision or Rear collision:

Any of the two may occur because of the wrong allocation of line or passing a signal at on by the loco pilot. In extreme exigencies equipment failure or unauthorized interference with the system may result in the signal coming OFF for an occupied line where flank protection is provided.

The yard may be equipped with:

In the first case where no track circuiting of berthing track is available observing clearance of line is to be done from the station, manually. In such a case any laxity in checking line clearance may result in the head on or head to a tail collision. Another situation may be where the loco pilot has passed the signal at ON. In both the situations, it is very difficult to find out the cause if the station staff takes a stand that the loco pilot has passed the signal at ON and the loco pilot says that he saw the signal OFF. The inference shall be drawn about the cause of the accident by the Train log records of the station and both the cabins along with their private number books, if taken into custody in time, the statements of the operating staff of the station and the loco pilot, assistant loco pilot and Guard of the affected train.

In the case when the entire yard is track circuited usually in case of central panel interlocking or RRI, the system is such that it is not possible to receive a train on a track occupied besides unauthorized interference is almost impossible. The central panel interlocked stations are usually provided with data loggers which, when accounted for with other records and statements of staff it is possible to a large extent to substantiate the cause of the accident.

Side collision in station section:

Side collision may take place in Three situations:

Side collision when the train is standing on a line infringing with the schedule of dimensions with the adjoining line on a turnout or crossover. The GR 4.56 provides that “When a train comes to a stand at a station, the Guard shall see that, whenever possible, the last vehicle of his train has cleared the fouling marks of all points and crossings. If not, he shall inform the station at once and exhibit Stop hand signal to prevent any movement on the fouled line”.

In addition, on stations where point zone is not track circuited, a fouling bar is provided linked with the point in such a way that it is not possible to change the position of the point from the last operating position unless the train clears the fouling bar. With this, it shall not be possible to receive next train on adjoining line unless the points are changed from their last operating position. On stations where point zones are track circuited flank protection is achieved by providing track circuits in such a way that the part of the track circuit falling within the fouling mark, if occupied shall not permit taking OFF the signal for adjoining line fouling the line on which train is already standing.

Collision in the Block section:

In double line section due to: